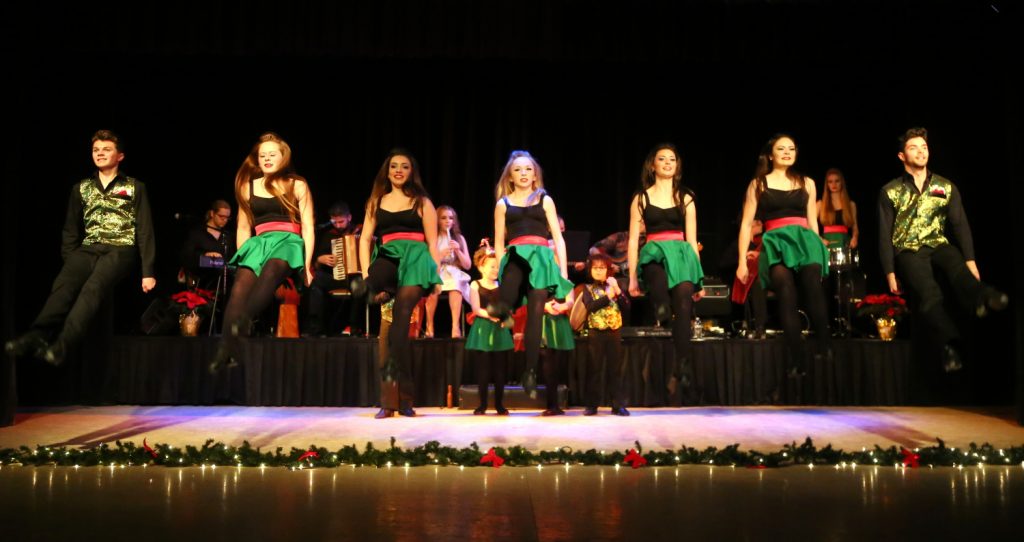 The Irish know how to have a party. OK, that’s a generalization, for I’m certain that there’s been many a fete full of Irish folk that never took flight. But, more often, they’re lively affairs in which each attendee is expected to understand that everyone pulls their weight to get the party off the ground. You either play music, dance, tell stories, engage strangers in conversation, or just contribute a lot of laughter and a welcoming spirit.

If you haven’t been invited to an Irish-flavored Christmas party this season, know that there’s a very enjoyable facsimile called “Celtic Holiday Hooley” that features high stepping and heart-quickening percussive dance by the O’Shea Irish Dancers and tunes to bring either a whoop or a tear from an all-star band of local Irish folk musicians. As for stories, well, will skits do? Because the ones that Joshua Will has created for this engaging production are pretty clever. Even if you don’t have a drop of Irish blood in you, it’s a great deal of fun.

While it’s great having the opportunity to enjoy the kind of traditional dancing that most of America discovered when “Riverdance” first visited in the mid-’90s — this show’s choreographer, Cormac O’Se was an original cast member — this “Hooley” feels more about the music than anything else. And, perhaps surprisingly for the party theme, it’s the ballads that made the strongest impression. Singer and flutist Norah Rendell delivered hypnotic and touching takes on “Winter, Fire and Snow” and, most memorably, the lullaby carol, “Lulay, Lulay,” which coaxed audible sniffles from some in the audience at St. Paul’s Celtic Junction on Friday afternoon.

A lovely rendition of the Pogues’ “Fairytale of New York” proved unexpectedly moving, for the six-piece band really brought out its melancholy undertow, the vocals of Rendell and Todd Menton the ideal mix of sweet and savory on this portrait of a Christmas breakup. And lending a Celtic flavor to that version of “The Little Drummer Boy” that Bing Crosby and David Bowie did together back in the ’70s proved a fine choice.

As for the dancing, it was consistently lively and well-executed, most thrilling when the steppers’ hard shoes rapped out rumbling rhythms, exchanged solos growing into large-group unisons. The music and dance mixed together beautifully — O’Se had a hand in both, for he’s also on accordion and percussion — reaching their apogee on a Celti-fied medley of “I Saw Three Ships,” “God Rest Ye Merry, Gentlemen” and “Ding Dong, Merrily on High.”

If you’re a baseball fan, you may be familiar with Joshua Will as the master of on-field entertainment at St. Paul Saints games. Or perhaps you saw him back when he was in Brave New Workshop shows. He and co-host Natalie O’Shea delivered some very funny skits together, the best of them being the interview process for a new member of Santa’s reindeer team, a comically impossible-to-follow sing-along that mashes up countless seasonal songs, and a minister riffing hilariously on the biblical list of who begot whom.

The music also features fine contributions from keyboardist/singer Dennis Curley, guitarist Dean Magraw and, on Thursday, fiddler Kelsey Lutz. And, if you aren’t getting enough cuteness in your holiday celebrations, the youngest members of the O’Shea Dancers will leave you aaaaw-struck.