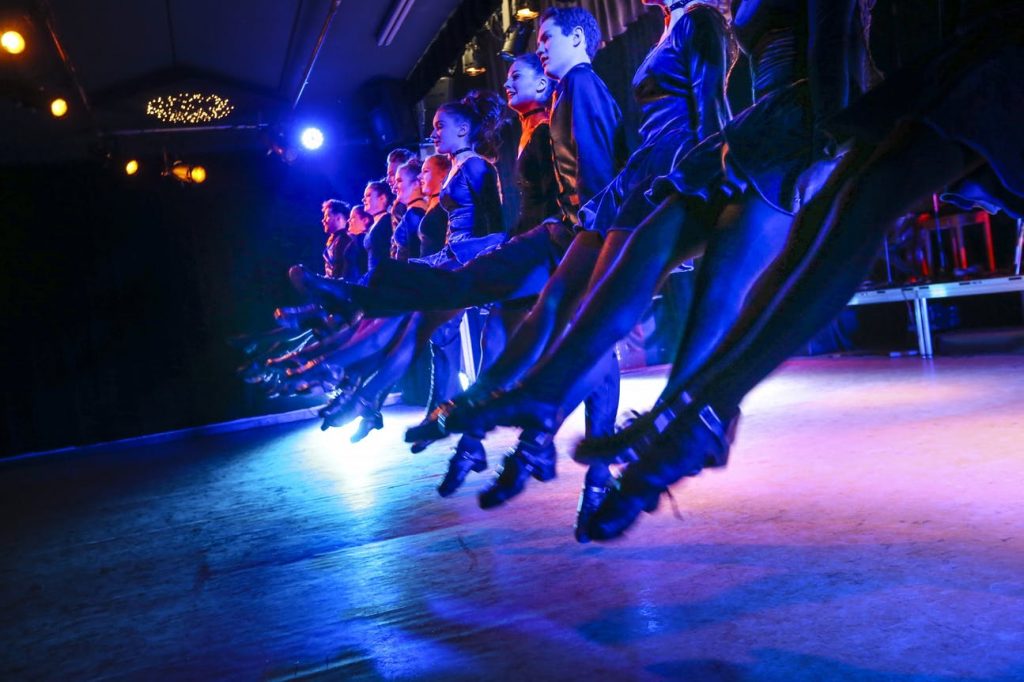 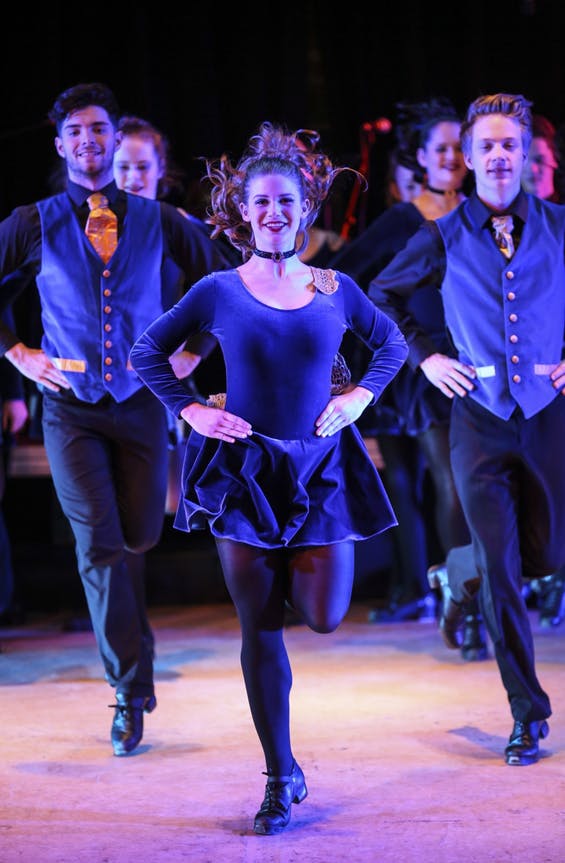 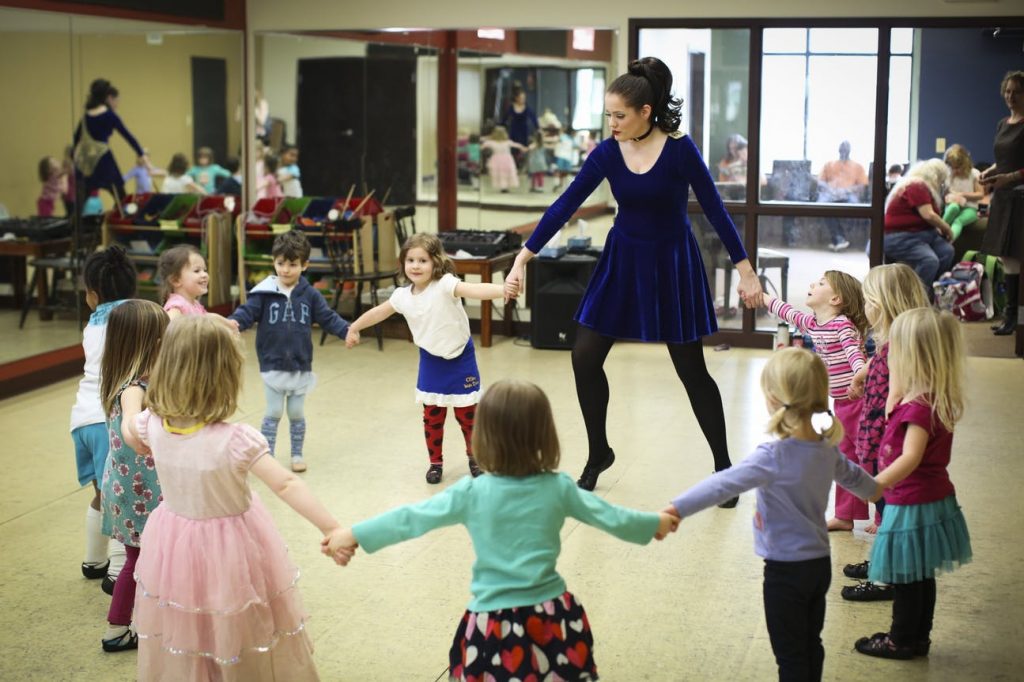 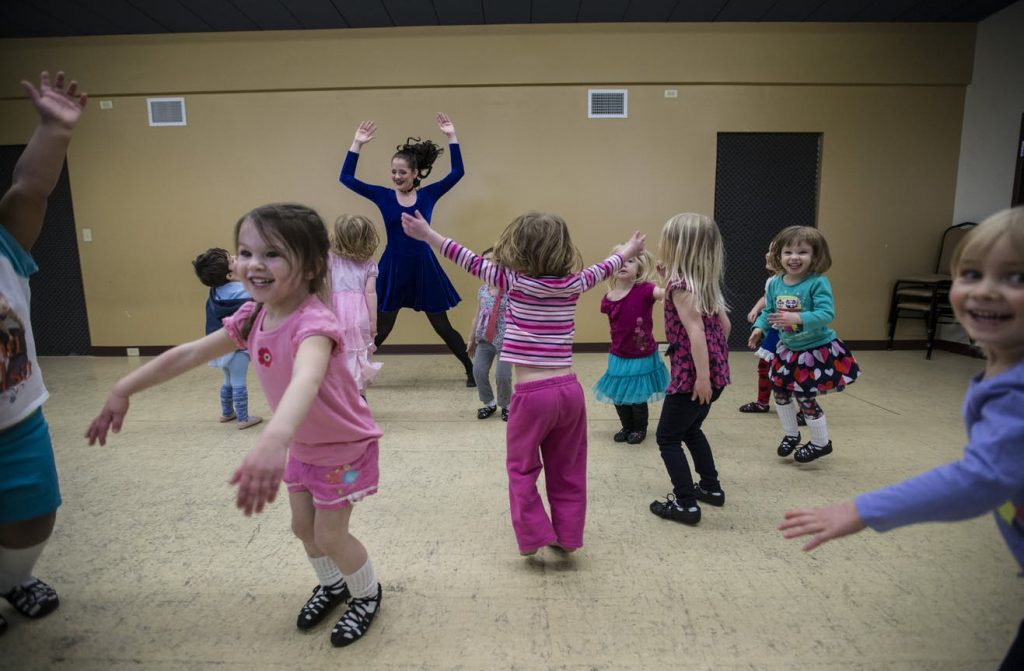 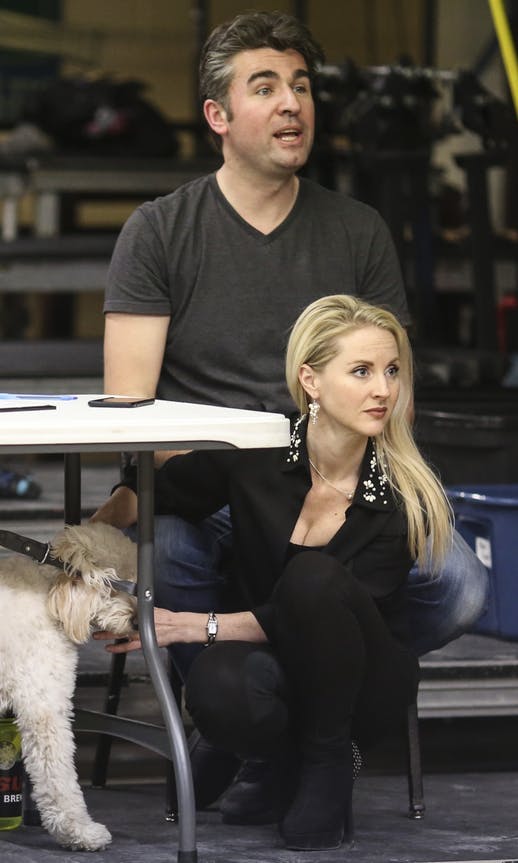 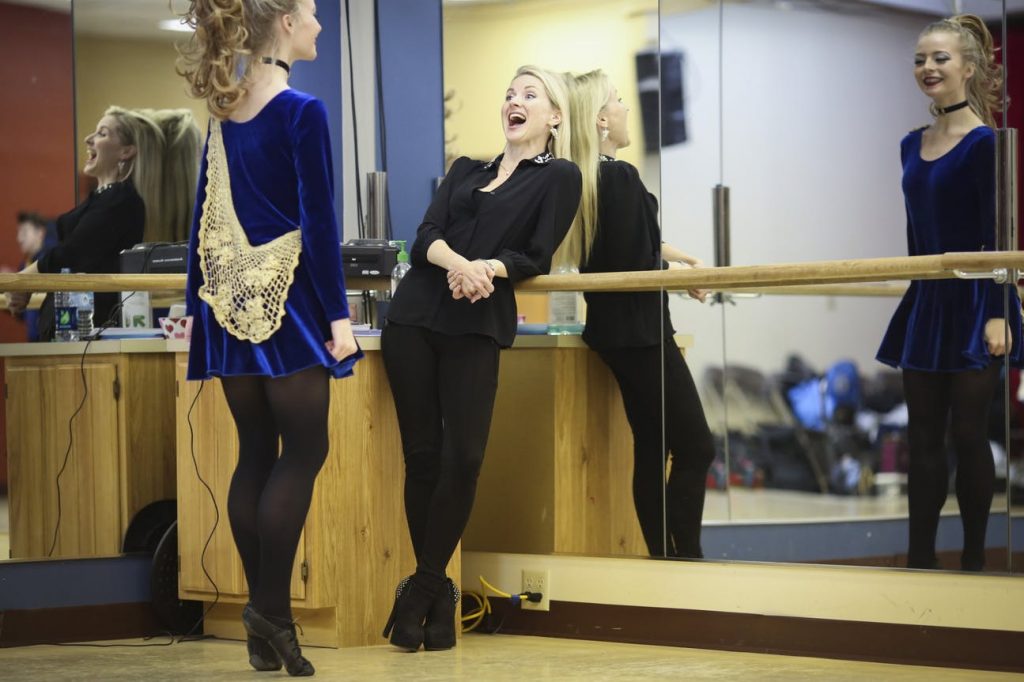 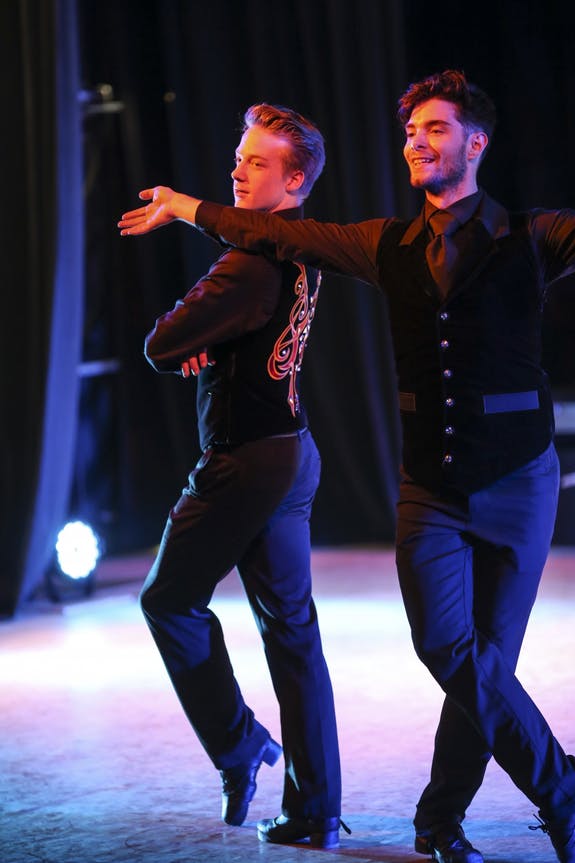 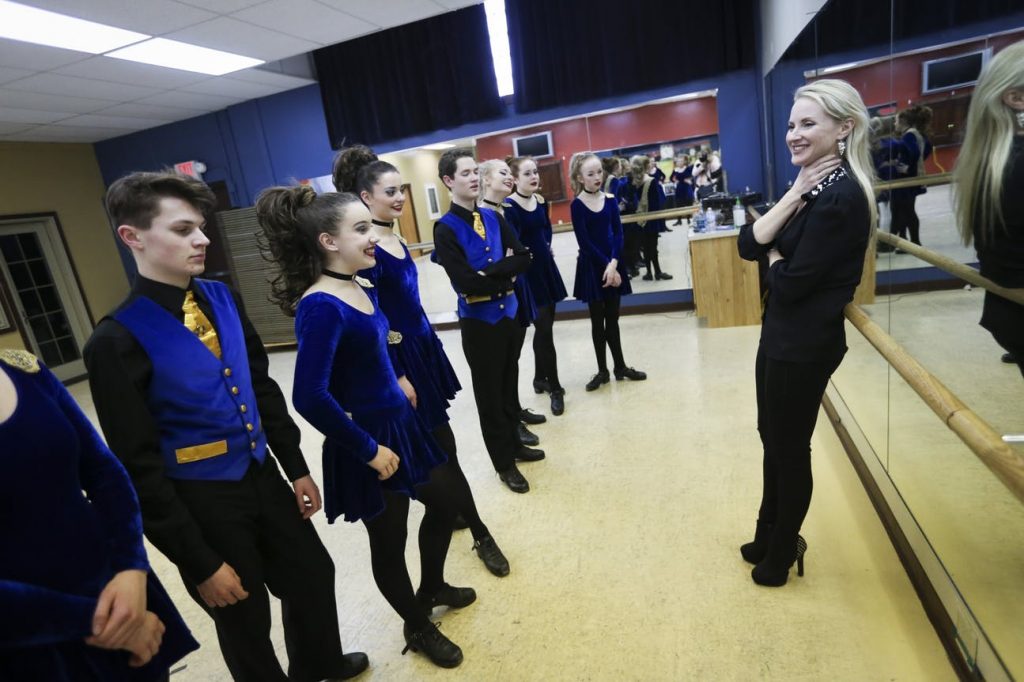 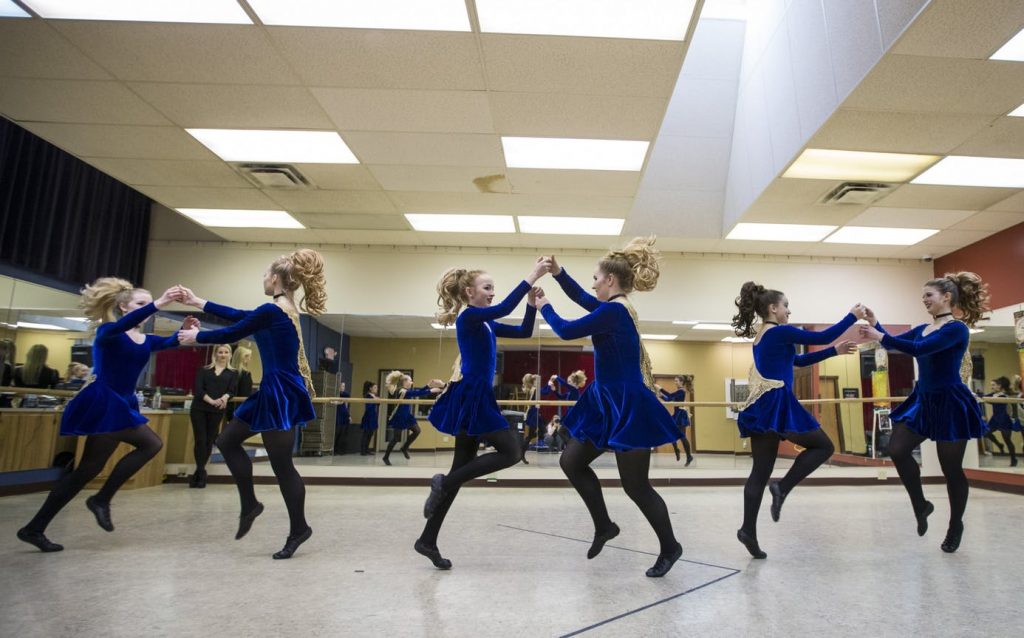 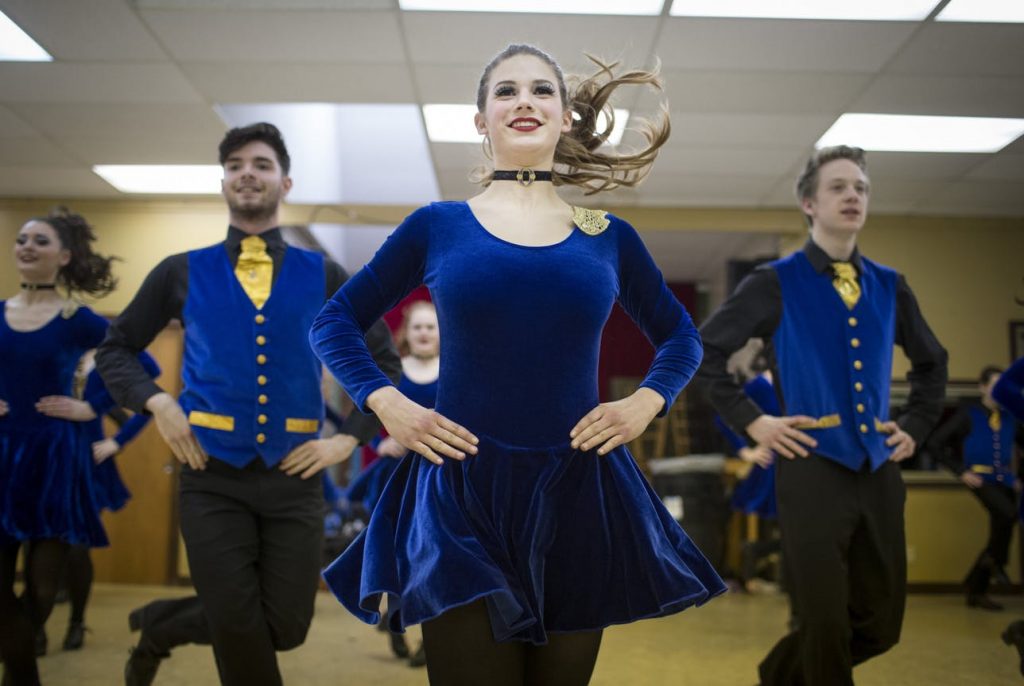 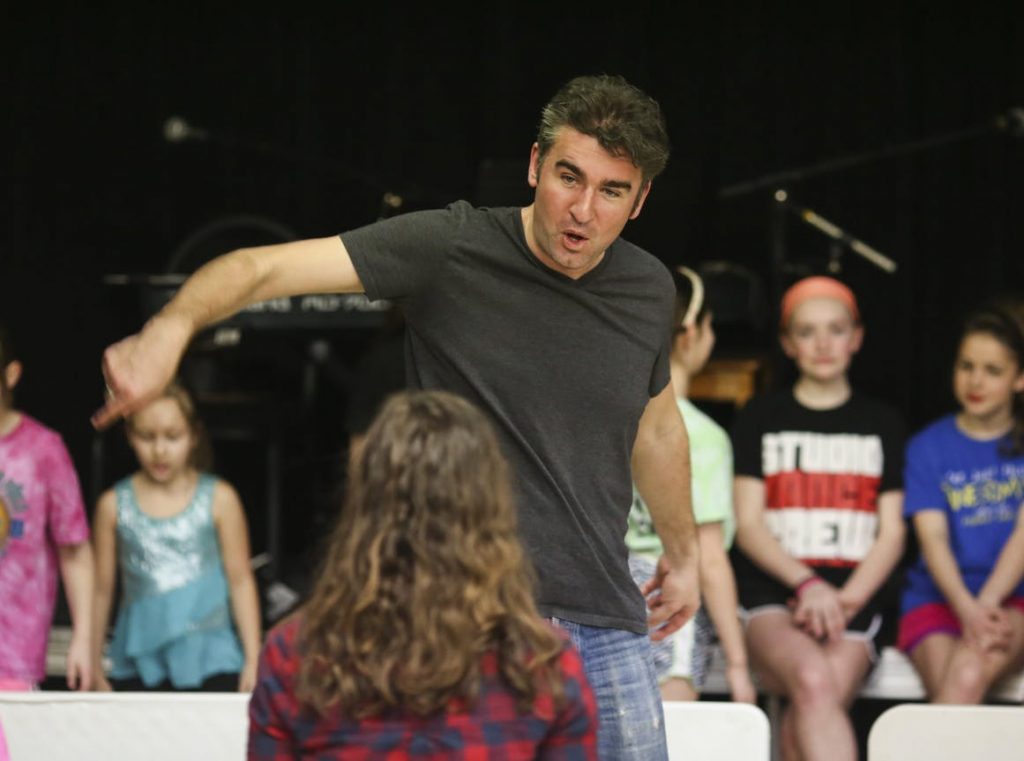 “There’s still very few people with joy in their dancing. Right now it looks like we’re in court,” O’Sé shouted over the accordion music filling the room. “Dance class should be happier than court!”

Twenty-five Irish dancers, mostly middle-schoolers, masked their concentration under beaming smiles and tried the combination again. The sound of their shoes tapped out complex rhythms on the wood floor. With arms frozen at their sides and feet moving faster and faster, the dancers hopped, skipped and leapt into the air.

For the students of O’Shea Irish Dance, the weeks leading up to St. Patrick’s Day are nonstop. They’ve already performed their own show, “Kickin’ It Irish,” throughout the weekend and will dance several times at Landmark Center and the Ordway on St. Patrick’s Day.

“It’s a great time for us as a school,” said O’Sé, who is the teacher, choreographer and co-founder of the program. “There’s never one St. Patrick’s Day like another for us.”

The Landmark Center performance will feature many of these students, including little 3-year-old “dance babies.”

“Mostly they’ll skip and stop and look at the teacher,” said O’Shea, as she paused to help a student with a broken shoelace. “They’re the cute factor.”

During last week’s class, the O’Shea school was in cheerful disorder. Laughing children ran in every direction; one girl handed out birthday cookies, and the studio dog, Orla, wove through the dancers.

“It isn’t extra chaotic in here just because of St. Patrick’s Day,” O’Shea said. “This is the usual chaos.”

Instructor Mikayla Newby, 16, will help lead the beginners in their performance.

Through years of instruction, this “chaos” might turn out someone like Evan Lowe. The 19-year-old student of O’Sé’s is the national champion Irish dancer of his age group. After attending the Irish Fair of Minnesota when he was 3, Lowe said, he fell in love with Irish dancing.

The O’Shea school sits inside the Celtic Junction, a building brimming with Irish pride in the Hamline-Midway neighborhood of St. Paul. Besides the dance studio, it is home to the headquarters for the Irish Fair, an Irish folk band, and the Center for Irish Music. Many of the O’Shea dancers take music lessons at the center, learning such instruments as the fiddle, harp or wooden Irish flute.

“No standing; dancing only,” he said with a grin, while listening to the rhythms the dancers pounded out with their shoes.

The O’Shea dancers learn three distinct forms of Irish dance. Dancers begin with soft shoes (or poms, to use the dance term), focused on creating shapes with the feet and knees. Then they progress to the hard shoe (like a hybrid tap shoe, clog and pointe shoe), which is all about creating rhythms with the music. And there is also team dancing (called ceili), where eight dancers perform together.

For ceili dancing, the performers have to “start very young and they have to get very precise,” said O’Shea. It takes incredible teamwork to create the formations and patterns of the traditional folk dance. Ceili dancing is often performed in costumes with elaborate embroidery.

The teams of eight dancers must move seamlessly from lines to interlacing circles, and their feet never stop moving. Knee-high kicks raise the stakes — if even one dancer is out of place, they’re in danger of being kicked.

“The Irish are so intricate in everything they do,” O’Shea said. “The feet are as intricate as any of the Celtic knot work.”

As early as age 7, O’Sé helped his parents teach at their dance studio in Dublin. By 16, he had joined the original cast of “Riverdance” on a worldwide tour.

When O’Shea joined the American cast, the two fell in love — and eventually settled down in her home state of Minnesota.

Some of their students have grown up at the school in the decade since, training for more prestigious performances and competitions as they progressed.

National champion Lowe is one of 18 O’Shea dancers heading to the World Championships in Montreal at the end of the month. So on top of rehearsing for St. Patrick’s Day shows, these dancers are also prepping for the biggest competition of the year.

“Paddy’s Day gets right in the way of that,” O’Sé said. A part of him would rather keep training.

But the shows must go on. And that’s fine with Lowe. This time of year just gives him more opportunities to dance.

“You can ask any dancer why they do this,” he said. “It’s an obsession.”

Libby Ryan is a University of Minnesota student on assignment for the Star Tribune.

Originally published by the Star Tribune at http://www.startribune.com/a-st-paul-irish-dance-school-kicks-off-st-patrick-s-day/296476891/